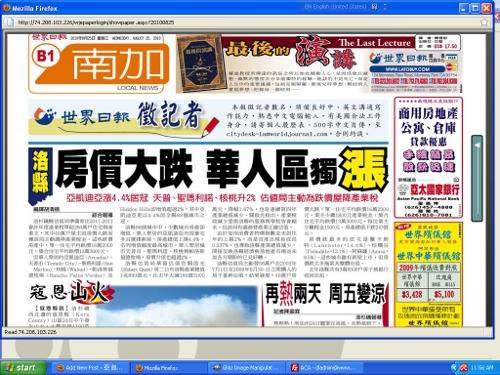 Fueled by high home prices and relatively low unemployment, property values in the West San Gabriel Valley continued to climb despite a down economy, according to a year’s worth of data released Tuesday by the county tax assessor.

Meanwhile, property values in the Whittier area and the East San Gabriel Valley continued to drop.

Pasadena and nearly every city near it saw property values increase in 2009, according to the Los Angeles County Assessor’s Office.

*Includes all of unincorporated L.A. County

Arcadia’s combined property value went up 4.4 percent, more than any city in the county.”The majority of new homes built in Arcadia range in size from 3,000 to 6,000 square feet and some are built in excess of 10,000 square feet,” the report found. “The strong resale value of these luxury homes and increased demand for new construction are the main factors that led to this city’s growth.”

The next top two spots in the county were taken by Temple City and San Marino, which had increases of 2.9 percent and 2.4 percent.

Unemployment in those cities is about 8 percent, far less than the county average of 12.4 percent.

One area Realtor said buyers are looking for good schools for their children.

“The main contributing factor to keeping property values level or increasing is the school system,” said Jeanne Keating, a Realtor at Keller Williams and president of the Arcadia Association of Realtors.

“The schools are very, very well known and have been forever,” she said. “When it comes to schools, they don’t want average. They don’t want good. They want great.”

The availability of luxury homes, a solid city government and a stable community also factor into Arcadia’s $713,500 median home price, she said.

Overall, however, property values in the county dropped 1.7 percent, according to the assessor.