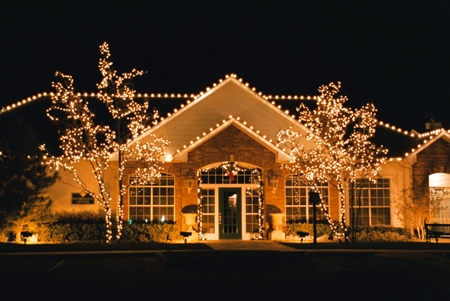 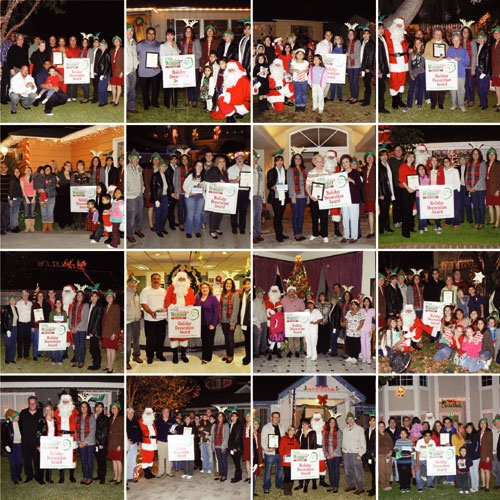 Comments on the Arcadia Holiday Decorative Lighting Awards
by Edward Huang, Arcadia Beautiful Commissioner 本市美化委員會委員黃鐵嶼
As a Commissioner of the Arcadia Beautiful Commission, this is my 2nd year paticpiated in the process of judging and ranking of properties for the Holiday Decortaive Lighting Awards.  This year a total of 16 properties have been selected for the awards.  It is a good expereince and we as Commissioner during the selection process have the chance to see most beautiful decortive lighting in the City.  A Santa Squad made of the Mayor and Commissioners visited the winners in the evening of Wednesday December 16 and handed the winners a beautiful yard sign to annouce the award.
I like to offer two comments on the event.  First, during the tour of our group judgement by the Commissioners, we found that the lights of several properties initially nominated by individual commissioners for group ranking were not turned on.  Those properties were not able to be reviewed and thus considered in the ranking process.  A couple of them were nicely decorated. It is very unfortunate they missed the opportunity.

Last year in order to promote Chinese households in the city to participated in the event and thus to enhance the overall holiday ambience in the city, prior to the Commission’s judging process I wrote a news briefing on the award and got published in the Chinese Daily News.  Unfortunately among those received the last year’s award there was no Chinese households.   This year I expand my effort:  instead of a briefing I wrote a length article in Chinese introducing the award program and anouncing the key days of this year’s event, and the article was published in ACA’s website in Novemner.  I further contacted Chinese news media, and as far as I know at least two Chinese newspapers provided coverage with featuring article in November.  Unfortunately no Chinese houshold won the awards this year either.

While disappointed with the result, I encourage Chinese family in the City to actively participate in this community event in the coming years. As a Arcadia Beautiful Commissioner I will keep promoting the event in the future. At the end I like to take this opportunity to thank ACA for publishing the anouncement article and look forward to ACA’s support again next year to promote the event.